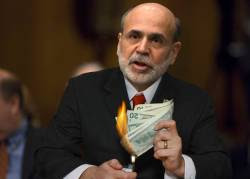 “U.S. Economy Grinds To Halt As Nation Realizes Money Just A Symbolic, Mutually Shared Illusion
FEBRUARY 16, 2010 | ISSUE 46•07
WASHINGTON—The U.S. economy ceased to function this week after unexpected existential remarks by Federal Reserve chairman Ben Bernanke shocked Americans into realizing that money is, in fact, just a meaningless and intangible social construct.
What began as a routine report before the Senate Finance Committee Tuesday ended with Bernanke passionately disavowing the entire concept of currency, and negating in an instant the very foundation of the world's largest economy.
"Though raising interest rates is unlikely at the moment, the Fed will of course act appropriately if we…if we…" said Bernanke, who then paused for a moment, looked down at his prepared statement, and shook his head in utter disbelief. "You know what? It doesn't matter. None of this—this so-called 'money'—really matters at all."
"It's just an illusion," a wide-eyed Bernanke added as he removed bills from his wallet and slowly spread them out before him. "Just look at it: Meaningless pieces of paper with numbers printed on them. Worthless."
According to witnesses, Finance Committee members sat in thunderstruck silence for several moments until Sen. Orrin Hatch (R-UT) finally shouted out, "Oh my God, he's right. It's all a mirage. All of it—the money, our whole economy—it's all a lie!"
Screams then filled the Senate Chamber as lawmakers and members of the press ran for the exits, leaving in their wake aisles littered with the remains of torn currency.
As news of the nation's collectively held delusion spread, the economy ground to a halt, with dumbfounded citizens everywhere walking out on their jobs as they contemplated the little green drawings of buildings and dead white men they once used to measure their adequacy and importance as human beings.
At the New York Stock Exchange, Wednesday morning's opening bell echoed across a silent floor as the few traders who arrived for work out of habit looked up blankly at the meaningless scrolling numbers on the flashing screens above.
"I've spent 25 years in this room yelling 'Buy, buy! Sell, sell!' and for what?" longtime trader Michael Palermo said. "All I've done is move arbitrary designations of wealth from one column to another, wasting my life chasing this unattainable hallucination of wealth."
"What a cruel cosmic joke," he added. "I'm going home to hug my daughter."
Sources at the White House said President Obama was "still trying to get his head around all this" and was in seclusion with his coin collection, muttering "it's just metal, it's just metal" over and over again.
"The president will be making a statement very soon," press secretary Robert Gibbs told reporters. "At the moment, though, his mind is just too blown to comment."
A few U.S. banks have remained open, though most teller windows are unmanned due to a lack of interest in transactions involving mere scraps of paper or, worse, decimal points and computer data signifying mere scraps of paper. At a Bank of America branch in Spokane, WA, curious former customers wandered aimlessly through a large empty vault, while several would-be robbers of a Chase bank in Columbus, OH reportedly put their guns down and exited the building hand in hand with security guards, laughing over the inherent absurdity of the idea of $100 bills.
Likewise, the real estate industry has all but vanished, with mortgage lenders seeing no reason to stop people from reclaiming their foreclosed-upon homes.
"I don't even know what we were thinking in the first place," said former banker Nathan Collins of Brandon, MS, as he jimmyed open a door to allow a single mother and her five children to move back into their house. "A bunch of people sign a bunch of papers, and now this family has no place to live? That's just plain ludicrous."
The realization that money is nothing more than an elaborate head game seems to have penetrated the entire country: In Wilmington, DE, for instance, a collection agent reportedly broke down in joyful sobs when he informed a woman on the other end of the phone that he had absolutely no reason to harass her anymore, as her Discover Card debt was no longer comprehensible.
For some Americans, the fog of disbelief surrounding the nation's epiphany has begun to lift, with many building new lives free from the illusion of money.
"It's back to basics for me," Bernard Polk of Waverly, OH said. "I'm going to till the soil for my own sustenance and get anything else I need by bartering. If I want milk, I'll pay for it in tomatoes. If need a new hoe, I'll pay for it in lettuce."
When asked, hypothetically, how he would pay for complicated life-saving surgery for a loved one, Polk seemed uncertain.
"That's a lot of vegetables, isn't it?" “
Posted by beleggenopdegolven at 15:52