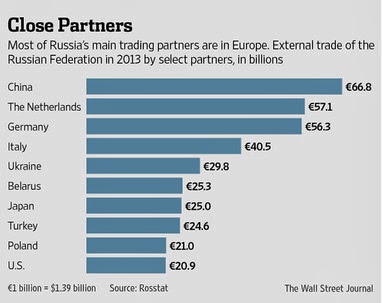 I want you to hear me, dear friends. Don't believe those who scare you with Russia, who are shouting that other regions will follow Crimea. We don't want a division of Ukraine. We don't need that. As for Crimea, it has always been and it will remain Russian, Ukrainian, and Crimean Tatar.


The West has failed to give up the policy of confining Russia that it has been pursuing for centuries. We have every reason to think that the notorious policy of confining Russia, pursued in the 18th, 19th and 20th centuries, continues today. Attempts are being made all the time to drive us into a sort of corner merely because we have an independent position which we defend, and because we call things by their proper names, without being hypocritical. But everything has it limits.


Russia is grateful to China and India for their stance on Ukraine and Crimea. We treat with gratitude everyone, who approached our step in Crimea with understanding. We are grateful to the Chinese people, whose leadership has considered and is considering the situation concerning Ukraine and Crimea in its entire historical and political complexity. We highly appreciate India's constraint and objectivity.


The West crossed all possible lines in the situation with Ukraine. Everything has its limits, and our Western partners crossed the line in the situation with Ukraine, they were rude, irresponsible, and unprofessional. Our western partners knew very well that millions of Russian people live in Ukraine and Crimea. They have totally lost their political intuition and sense of measure and they did not predict all the consequences of their actions. Russia was in a situation where it couldn't go back. If you press a spring really hard, it will spring back really hard. You should always remember that.


Nationalists, neo-Nazis, Russophobes and anti-Semites have become the main executors of the revolt in Ukraine. Namely they determine to a large extent the life of Ukraine up until now. Ukraine still lacks legitimate leadership, while many of the state agencies remain under radical element control. There is no legitimate government in Ukraine. There is no one to deal with. Many of the state agencies have been usurped by impostors. They do not control anything in the country and many of them are under radical control.


Russia did not send troops to the Crimea, but only reinforced its grouping within the limits set by an international agreement. It is true that the Russian president has received the right from the upper house of parliament to use the armed forces in Ukraine. Strictly speaking, the president has not even used this right so far. The Russian military did not enter Crimea. The troops were there already in compliance with an international agreement. It is true that we have strengthened our grouping. But I would like to make a point everyone should know and hear: we have not even surpassed the limit of 25,000 troops - the assigned strength of our armed forces in the Crimea. There was just no need in that.


It would be right to give the Russian, Ukrainian and Crimean Tatar languages equal status of state languages. I know the population of the Crimea supports this idea. I think that all necessary political and legislative decisions, which will complete the process of the Crimean Tatar people's rehabilitation, and the decisions, which will restore their rights and good name to full extent, should be taken

Crimea should be under Russian sovereignty. Crimea is part of our common heritage and a key factor of stability in the region. This strategic territory should be under strong, stable sovereignty, which in effect can only be Russian. Germany, whose unification Russia has supported, will also approve the aspiration of the Russian world to restore unity. I believe that Europeans, firstly Germans, will understand me.


During the political consultations on the unification of East Germany and West Germany "at expert, but very high levels, representatives of not all countries, who were Germany's allies, supported the very idea of unification. Our country, on the contrary, supported explicitly and sincerely the aspiration of Germans for national unity. I am certain that you have not forgotten this and I count that German citizens will support the aspiration of the Russian world and historical Russia to restore unity.

Russia will always defend the interests of Ukraine's Russian-speaking citizens, using political, diplomatic and legal methods. But Kyiv, too, should show interest in observing the rights of all citizens living in Ukraine. Millions of Russian people, Russian-speaking citizens, live and will live in Ukraine. Russia will always defend their interests using political, diplomatic and legal methods. But Ukraine, too, should be interested in guaranteeing the rights and interests of these people. This would guarantee stability, the Ukrainian state system and the country's territorial integrity.

We do not want a military organization to be bossing us around near, our fence, next to our home or in our historical territories. You know, I cannot imagine us going to Sevastopol as NATO sailors' guests. By the way, most of them are excellent people. But better, let them come to Sevastopol as our guests, rather than us visiting them. I am submitting and asking the Federal Assembly to consider a constitutional bill on accepting two new constituent regions as part of the Russian Federation - the Republic of Crimea and the city of Sevastopol. We want peace and accord to come to Ukraine. We are ready to provide all possible support and assistance to that, together with other countries. I am saying it again: only citizens of Ukraine can bring order to their own home. We will never seek confrontation with our partners in the East and the West. On the contrary, we will do everything to build civilized good-neighbourly relations, as is accepted in the modern world.
Posted by beleggenopdegolven at 00:28