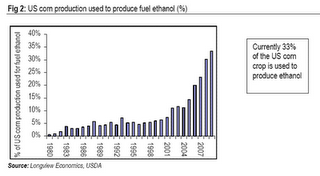 Van Chris Watling , 31 maart 2010
Een samenvatting van zijn artikel over biofuel. Hieruit blijkt dat men in de VS ruime aandacht wil geven aan de ethische problemen van de productie van ethanol. De CO2 productie wordt gereduceerd door te werken met restafval en niet zo zeer het pure product (mais in de VS, suiker in Brazilië)
Watling:
The use of biofuels has grown rapidly in the US (by almost 30% p.a. over the last 7 years). As such the US consumes almost half of the world’s biofuels market. That equates to 4% of the US gasoline market (NB after adjusting biofuels for their lower energy content). In this section we examine the viability of the major type of biofuel (i.e. ethanol).
Ethanol accounts for almost all the biofuels used in the US (i.e. currently 95%). It is a substitute for gasoline and it is mostly derived from corn (1). Its consumption has grown rapidly in recent years (by 21% CAGR in the last 10 years). Despite that, the government is aiming to cap ethanol use (from corn) at a maximum of 15 billion gallons. It expects to reach this level by 2015 (NB 9.6 billion gallons of cornethanol were consumed in 2008).
This reflects two key reasons: First, the environmental benefits from corn-ethanol are contentious. Corn-ethanol only delivers a 19% reduction in greenhouse gasses
(GHGs) on average (compared to those emitted by gasoline). Other biofuels, though, can deliver up to an 86% reduction in GHGs. Furthermore, many highlight the effect of larger crops and more fertiliser on marine life – and argue that fertilisers create greenhouse gasses which are worse than carbon.
Second, there are concerns that corn-ethanol is not sufficiently scalable (without affecting the supply and price of both food and animal feed). Indeed, 33% of the US corn market is used to produce ethanol – up from 11% in 2004 (fig 2). Not surprisingly, ethanol has therefore been blamed for the corn price rise of 2007 & 2008 (albeit this price rise has now reversed). The US congressional budget office, for example, estimate that as much as half of the ‘07 to ‘08 rise in corn prices can be accounted for by the use of corn for ethanol (2).

Instead, the US is targeting the use of ‘advanced’ ethanol. Cellulosic ethanol is the key example. It is made from plant leaves and stems which come from a broad mix of crop types (3). As such, competition between food and fuel can be avoided. Furthermore, the reduction in GHGs compared to gasoline is significant (86% on average). The US target, therefore, is for almost all the growth in the biofuel market to come from this source (fig 3). Currently though, cellulosic ethanol is only a small component of the biofuels market. For the year 2010, for example, the government is targeting the use of 6.5 million cellulosic ethanol-equivalent gallons (4). This is just 0.07% of the US biofuels market. Importantly, that target was recently revised down from a less realistic 100 million gallons (in February 2010). The target by 2020, though, is also ambitious (i.e. 10.5 billion gallons). For both the 2010 and 2020 targets to be met, the use of cellulosic ethanol will have to grow by 110% every year for 10 years. Currently this is unlikely. Indeed, only 72 million gallons of annual capacity is about to come on stream in the next 3 years (with another 225 million gallons of capacity for which no production start date has been given) – according to a recent study by the Renewable Fuels Association.

(1) While corn is the key source of ethanol in the US, this differs by country. Sugar cane, for example is used in
Brazil while sugar beets is used in Europe.
(2) See http://www.cbo.gov/ftpdocs/100xx/doc10057/04-08-Ethanol.pdf
(3) These crop types include switchgrass, agricultural residues, and hybrid poplar trees.
(4) See http://epa.gov/otaq/renewablefuels/420f10007.htm#2

Biofuels conclusion: The major sources of ethanol in the US (both current and targeted) have key limitations. Our best case scenario, therefore, anticipates biofuels consumption, by 2020, which is in line with government targets. This would deliver a saving of 1.2 mbpd and account for 5% of the US oil market by 2020. Our central and worst case scenarios assume that targets for cellulosic (& other
advanced) biofuels are not reached (and reduce oil demand by between 3 – 4%). See appendix for detail.
Interestingly, the White House recognises the challenge of its own targets. In particular, they admit that they are not on a trajectory to reach current goals; that infrastructure for fuel distribution is challenging and that, while projects have been funded, they have not been actively managed to achieve targets (5).
Interestingly the IEA have forecast US biofuels consumption (by 2020) to be approx. 30% below government targets.
Posted by beleggenopdegolven at 19:09