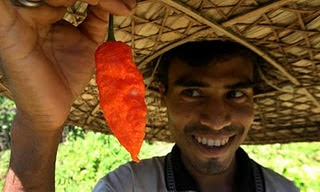 Ever since the Trojan Horse – and probably long before – men have bent their minds to developing the ultimate secret weapon. Now, at last, the Indian army just might have discovered it: the world's hottest chilli pepper.

The Indian army believes that the pungency of its ground seeds of the bhut jolokia – a capsicum hybrid, growing around the banks of the Brahmaputra river, that is reputed to be 100 times hotter than a jalapeño – could be harnessed in smoke grenades against rioters or to flush out terrorists in confined spaces. The army said the weapon could also be used in aerosol sprays by women warding off attackers.

Older readers who can recall The Goon Show's Major Dennis Bloodnok's frequent strangulated cry of: "It was hell, I tell you. No more curried eggs for me!" may wonder why it has taken them so long, for the vegetable is said to be powerful enough to deter a charging elephant.

The 3in-long stubbly red pepper has been measured at 1,041,427 units on the Scoville scale, twice as hot as the next fieriest pepper, the Mexican red savina, and 200 times hotter than Tabasco sauce, so much so that it gained a place in Guinness World Records. A jalapeño, by contrast, registers a measly 10,000 on the Scoville scale.

RB Srivastava, director of the life sciences department at the New Delhi headquarters of the Defence Research and Development Organisation, said: "This is definitely going to be an effective non-toxic weapon because its pungent smell can choke terrorists and force them out of their hideouts. It would literally choke them."
Posted by beleggenopdegolven at 00:21